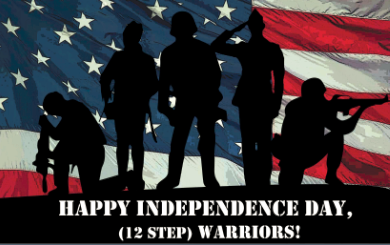 For an alcoholic like myself, it seems almost impossible to think about the 4th of July without thinking about the ability to live life independent of active addiction. This may not be the case for most people, but for someone who lived in the servitude of crippling alcoholism for years, using this day to reflect on the freedom that I have experienced through recovery seems appropriate. It couldn’t be more fitting that I should be given the opportunity to spend the day celebrating the 80th anniversary of the 12 Steps at our Fellowship’s International Convention in Atlanta. While some may overlook the parallel between Independence Day and recovery, those of us gathered here know that the 12 Steps have become the arsenal by which liberation has been offered to thousands of suffering addicts. On this of all days, I am reminded of the sheer scope of the army we have organized through the spiritual program of action.

“Keep on the firing line of life which these motives and God will keep you unharmed.”

At times, our reliance on heartfelt slogans and inspirational memes may overshadow the desperate war which many addicts continue to fight each day in the battleground of their own minds. The overpowering obsession to use turns the addict’s mental landscape a combat zone between what is true and what is false. Inevitably, without a spiritual toolkit, many addicts will continue to lose the raging war against their illness. On one’s own power, the real alcoholic or addict will never overcome that battle. Independence Day reminds me of how frightening that war once was, and how grateful I am for the men and women who took the time to stand on the front line in order to show me the way out of enemy territory. I have been blessed to spend International Convention with many of those brave souls.

Without the dedication of those in the trenches,
I never would have been taught of the consequences of living a life without power.

Those who gathered on the firing line pulled me from the rubble and drew me to freedom because they took the time to explain the illness from which I was suffering. They guided me through the wreckage of my past, and helped me to navigate the inherent pitfalls of my own selfishness. Ultimately, I was taught that recovery was not a matter of steering clear of the first drink—it was a matter of willingness to engage in spiritual warfare. 12 Steppers taught me that though carrying the message may, at times, be a tiresome and tragic mission, it is the clearest sign of my commitment to the cause that saved my life.

Today, I am no longer confined to an existence in which I attempt to avoid the landmines of addiction. I have been set free to enjoy an extravagant life of peace in which I walk hand in hand with the Creator who is has become my greatest Defender. The men and women who carried the message to me were 12 Step warriors who were properly armed with the facts about themselves. On this day, I offer my deepest gratitude and respect for those who stood in the trenches in order to pull me from a life of repeated disaster and misery. As so many others here in Atlanta, I have vowed to echo their pledge to the newcomer by serving alongside them as a woman of valor.

True bravery cannot be displayed with anything short of action.

Those who stood on the firing line showed me what it meant to live a life of courage, dignity and honor. To those before me and those who have yet to come, I offer my sincerest appreciation. Thank you for your service.