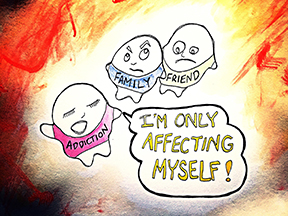 “I’m not hurting anyone but myself.”

I must have said that dozens of times. In the delusion of my addiction, I held fast to the idea that my destructive actions affected me and me alone. When I agreed to fearlessly assess the damage I had caused through the rigorous process of inventory, I started to become extremely aware of how much I had impacted those around me. Unfortunately, while I bore influence on family and friends, that influence was extremely negative (to say the least). As I began to read about the commitment I was set to make in the Third Step, any question that I had about my ability to impact others was snuffed out.

“Most people try to live by self-propulsion.

Each person is like an actor who wants to run the whole show;

is forever trying to arrange the lights, the ballet, the scenery

and the rest of the players in his own way.”

That’s essentially what I thought the first time I read that passage. In surveying the screenplay of my life during the first days of my sobriety, I realized that I had been (rather ineffectively) trying to fashion the entire world according to my own version of reality. I wanted everyone to act the way I wanted, when I wanted and how I wanted—- a humorous proposition, given that my life was an unmanageable mess of alcoholic destruction. The greatest plot twist was that even when my self-developed script was carried out with relative accuracy, the result was still pretty lackluster. The critical review of my performance was clear: Through years of lying and selfish actions, I had proven myself to be a rather poor— yet influential— director who had taken an audience captive.

What I had yet to fully realize was that, in recovery, I would be given the opportunity to use that influence for the greater good. In working the Steps, I was given a connection to a Power that finally helped me to impact others along spiritual lines rather than for personal gain. The relationship I built with that Power not only made me into the person I wanted to be, it gave me the ability to affect people in a way that actually brought joy, rather than suffering.

“Take away my difficulties, that victory over them may bear

witness to those I would help of

Thy Power, Thy Love, and Thy Way of life.

May I do Thy will always!”

In the beginning of recovery, many of us are so convinced that our attempts to live successfully on self-will are hopeless that we eagerly engage on the course of self-inquiry outlined in the Fourth Step. That being said, we may have a tendency to set these experiences aside and hesitate to take action once we have recovered. I must admit that, at times, I have balked at the thought of continued self-searching. Not surprisingly, this unwillingness has only ever produced further inaction on my part, and inaction has always manufactured misery in my life and in the lives of those around me.

“Being all powerful, He provided what we needed,

if we kept close to Him and performed His work well.”

Without engaging in recovery on a daily basis—boldly and without reservation—I can easily return to playing the actor who unsuccessfully attempts to “run the whole show.” This is as true today as it was when I first got sober. Conversely, this fundamental truth means that the genuine freedom I experienced when God first became the Director of my life can still be experienced today.

As those who have recovered, our goal should be to inspire, influence and encourage those who have yet to discover that life in sobriety is worthwhile. In order to demonstrate the miraculous power that has entered my life, I must keep close to Him through consistent engagement with the disciplines that paved my way to freedom. Current and fearless encounters with the Steps, and with God, can lead to ever-increasing peace for our family, friends and those still suffering with addiction. Such experiences foster hope because they demonstrate that recovery is possible.

can have the greatest impact on others.