The Cycle of Addiction and Alcoholism 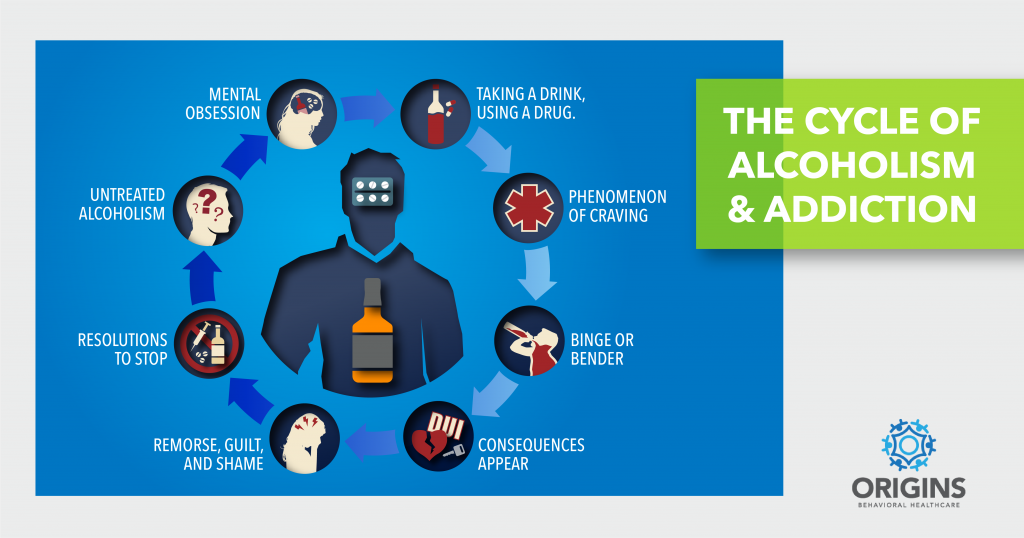 The Cycle of Addiction

Taking a Drink, Using a Drug

It begins when a person has one or two drinks or recreationally uses drugs. Their intention is to moderate or for their use to not get out of control. It’s most often accompanied by a rationale of, “I’m just going to have a couple to unwind.”

Upon drinking/using, an abnormal reaction takes place in the body which results in a craving for more of the substance. At this point, the drinker or user finds that they can no longer control their consumption, and end up taking more than they initially intended.

What started as an intention to control leads to drinking/using more than desired. Often it leads to a spree that will last hours, days, weeks, month, even years. It’s often described as drinking or using against one’s will because the person seemingly has little or no ability to control or stop.

With that binge comes consequences. Sometimes it’s the loss of a job, family or dignity. Legal, financial or health problems. Or they may be depression, trauma, and drama. Not everyone’s consequences are the same. It is important not to qualify alcoholism or addiction by the consequences that people experience, but rather by the action of alcohol on the body and mind.

Having drunk or drugged more than intended, humiliation or regret sets in. Promises have been broken, hearts have been broken, and the person themselves emerges broken. There’s a pledge to NOT repeat the same behavior and thereby avoid the same consequences.

“I’ll never do that again,” is a common refrain. A solemn oath or pledge is made to quit or control alcohol or drugs. The resolution is made with the utmost sincerity and a belief that “next time” it will be different. The resolutions are made to avoid the all past consequences.

With alcohol or drugs out of a person’s system, knowledge of the consequences and a vow of abstinence having been taken; all should be good.

Oddly enough, without alcohol or drugs, a person may become restless, irritable and discontented. Others experience the elation of finally being free from substances, and “buy the lie” that no further work is required to remain sober once and for all. Still, others remain sober for a very long time, believing that they were only “going through a phase.”

Addiction treatment professionals and members of the recovery community alike know that without a real change of heart, brought on by a true spiritual awakening, active addiction may be just around the corner.

For all involved, it feels like walking on eggshells. Ever waiting for the next shoe to drop. And often it does.

This is where the person falls victim to the belief that they can once again control and enjoy their drinking or using.

For those experiencing the restlessness, irritability, and discontentedness of untreated addiction, the person attaches to the idea that alcohol and drugs will immediately bring a sense of ease and comfort. That may be the loudest thought in a person’s head, even though they know it’s a very bad idea.

The mental obsession is often immeasurably stronger than a person’s willpower.